Well, now that the major Hollywood studios are fresh from dumping all their super hero/ animated turtle movies it’s time they started rolling out their latest attempts at capturing critics and Oscars alike…

Here’s a couple whose latest trailers look rather interesting (although not nearly as naughty as the new 50 Shades of Grey trailer where “Coming Soon” has an assortment of ribald meanings…).

Just when you thought former enfante terrible Mel Gibson was relegated to spending his remaining years building churches and raising sheep in Oz, he returns with a new WW2 drama that drew raves as well as some question marks as to his particular brand of “Faith- Based” filmmaking.

Based on the real life exploits of American soldier/Conscientious Objector Desmond T. Doss during the Pacific Theatre conflict, the screenplay/rights for this movie were in development hell for nearly two decades until it landed under the kilt of Mel Gibson who was set to make his next feature since the release of Apocalypto in 2006.

Starring Andrew Garfield as the Seventh Day Adventist soldier, Garfield (who will also be seen as a 17th Century Jesuit priest in Scorsese’s upcoming passion project “Silence”) has been garnering excellent reviews if the Venice Film Festival means anything although the reviews have been weighted on questioning the supposedly heavy-handed religious overtones (apparently hasn’t been a problem with anyone in the Trump/Pence campaign…).

Still, the praise re: Gibson’s ability to work a good action scene or two has been fairly unanimous so this definitely looks like one to see on the big screen as Mel tries to cement his comeback with both the Academy and audiences alike.

Affleck goes all Orson Welles on our cinematic asses doing triple threat writing, directing and starring in this Jazz Age era gangster story about a bootlegger who hightails it from the Boston mob only to end up in Florida to establish his hooch empire. 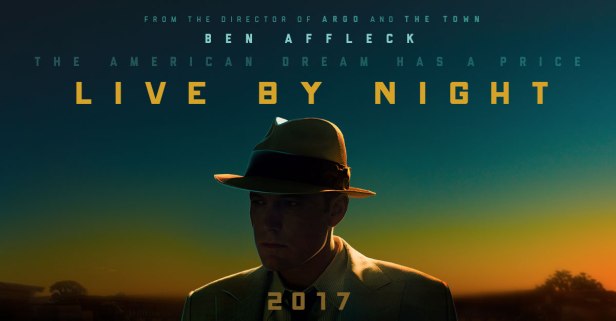 Based on the always reliable novelist Dennis Lahane’s novel, Affleck has had the good sense (like his previous Argo) to surround himself with an excellent supporting cast with the likes of Chris Cooper, Zoe Saldana, Elle Fanning and Sienna Miller.

Throw in the perennially Oscar-nominated cinematographer Robert Richardson whose worked with the likes of Tarantino, Scorsese and Stone, and you have a movie that could open with a bang for Academy members and filmgoers making for a nice Xmas present at your fave cinema.

So far, there’s been no word of mouth on this film as it has been under wraps with no previous film festival screenings to report but all signs are looking towards some pretty lofty critical acclaim by critics and blurry-eyed slouched-backed film bloggers like myself…