To coincide with today’s street date of the critically-acclaimed indie The Love Witch’s blu-ray dvd release, we’ve decided to post by popular demand (which included several threats to turn me into a newt…)  our original interview from late last year with uber-talented Writer/Director/Production Designer Anna Biller- enjoy!

We’re proud here at Wholly Cinema to have an exclusive interview with American filmmaker Anna Biller of the new movie “The Love Witch” that is currently playing and creating tons of positive buzz in cinemas across North America.

Fresh off killer reviews from heavyweight critics from both the NY Times and LA Times (to name a few…), if you haven’t seen this highly original and mind-blowing homage to ‘60’s horror films with a distinctly modern feminist twist and one of the most amazing female leads (actress Samantha Robinson) in recent years, then what are you waiting for?

And make sure you check out the trailer! 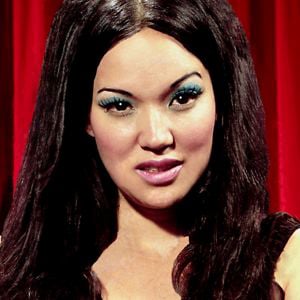 Wholly Cinema: How did you find your lead actress Samantha Robinson for “The Love Witch”?

Anna Biller: I found her through a regular casting call. Her manager did the usual submitting of her work and the fact she’s such an incredible person and actress and that she came my way was pretty lucky. I initially saw many actresses and went the process of taping auditions, call backs and some second meetings but with Samantha- she was the only one who had a third call back. She was perfect in every way because she was very excited about working on the role as a collaboration where we talked about the character, watched movies, tried things out and created the character together very organically.

WC: What was the shooting schedule like for “The Love Witch”?

AB: We had to have everything organized before we started shooting because there was a complicated and intricate amount of sets that we had to build and dress and we were able to shoot it in a row over the period of a couple of months. With the exception of a few pick up days later on that were postponed because of rain we were able to keep everything pretty well on schedule.

WC: This being your second feature that you’ve written (the previous film being “Viva”), take me through your writing process on “TLW”.

AB: My process is to just get it done! I read a lot of books on witchcraft, psychology- and watched a lot of movies to try and figure out the psychology of the character. I also did drawings to make it all seem clear to me visually which I would then translate into the script.

It’s a lot of work to make the characters realistic and to make the story make sense- you know how hard writing is- sometimes you just have to get it done.

WC: What were some cinematic (or otherwise) influences on “The Love Witch”?

AB: There wasn’t actually any one influence because I realized that there’s never been a movie like this ever made before. The movie was based on all these little bits of ideas that I had that came from all these different places of my life. The closest movie I can think of would be Hitchcock’s “The Birds” or “Marnie” and maybe “Psycho”- I was trying to make a psychological thriller about a woman and the female mystique.

The most direct influence on the script was probably George A. Romero’s “Season of the Witch” and Joseph Losey’s “Secret Ceremony”- and the films of Fassbinder. Also, Carl Dreyer’s “Gertrud” has a similar story arc to my film as well. It’s interesting that everyone thinks I meticulously watched and studied a lot of giallos and sexploitation films because I actually watched very few of those films- it’s more that I accidentally stumbled across that aesthetic. 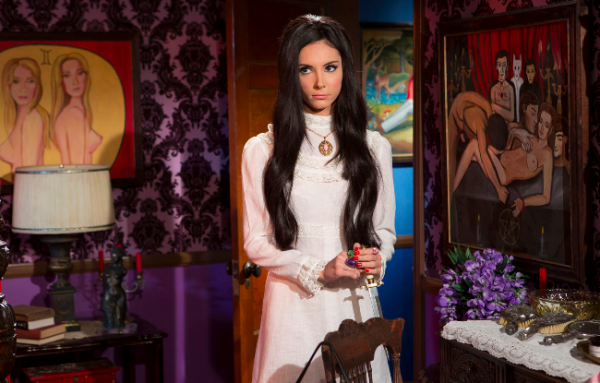 WC: What was a reaction to your film that most surprised you?

AB: I’m really happy that audiences really seem to enjoy the movie and are very vocal about it. They’re laughing and really enjoying themselves which is great because I really set out to make the film entertaining. I am surprised at how much people are laughing- I knew there were funny parts but even during the disturbing moments they’re still laughing. When I watch the movie on my own without an audience very little of it makes me laugh actually- they’re calling it a comedy which is a bit surprising… (laughter)….

WC: What was the biggest challenging in making “The Love Witch”?

AB: Being on the set and shooting the film is probably the hardest thing because everything has to come together- it’s a huge weight of pressure on me. Probably doing the production design may be the most difficult thing I do on set- maybe 90% of what I do on any given film is production design. It takes an immense amount of time, labour and thinking that goes into it- when people talk about the film they talk a lot about my production design probably because the sheer amount of work I put into it.

I’m trying to create a world that’s mythic and I can’t afford to get any details wrong. 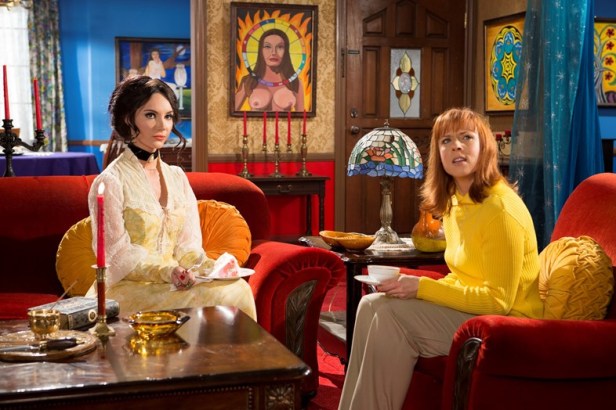 WC: Tell us about your next project?

AB: I’ve only been able to work on it in bits in pieces but I have some really strong ideas for my new script. Originally I wrote about half the script but had to toss it out- you know what it’s like when you write something but it moves in the wrong direction and you have to rethink everything. But I’ll be moving forward with it.

I’m not even sure about the time period it will take place in yet but I’m thinking it will be in the present- it’s about a man who’s a sociopath who has a lot of terrible secrets in his life. A bit of a noir thriller about a scary husband from the wife’s POV.

WC: I noticed when you were promoting “The Love Witch” in NYC recently, you were invited to stop by the offices of the Criterion Collection (the holy grail company of cinephile blu ray releases). How did this come about?

AB: I have no idea. They contacted my publicist and said they wanted to interview me- I found out some people there were fans of the film. I also tweet quite a bit about cinema so that might have had something to do with it.

WC: Could this signal your film to be included in an upcoming Criterion blu ray release?

AB: I think not. Our film already has a distributor but maybe down the road for my next film…

WC: What is the dvd/bluray release plan for “The Love Witch”?

AB: It will be coming out around Valentine’s Day- also digitally as well. I created all the Special Features for the dvd- and there are a lot of them so I think fans will be pleased. I spent a long time creating them- there’s deleted scenes and an audio commentary- they’re pretty nice.