Once again those purveyors of classic world cinema known as the Criterion Collection will be brightening the lives of film lovers with their brand spanking nuevo release of Italy’s grand master of cinematic tortured ennui Michelangelo Antonioni and his seminal international breakthrough “Blow Up” on bluray this week.

Dropped into cinemas in 1966 like a high detonation art film missile, the film immediately confounded and astounded audiences and critics alike with its rigorous rumination on obsession and its tenuous ties to reality as the plot revolves around a mod photographer played by David Hemmings as he becomes suspicious about what he feels is a possible murder in the background of one of his photos (Sorry “Die Hard 2” fans- nothing actually gets actually ‘blown up’ in this movie…).

A British/Italian coproduction, “Blow Up” was significant for being Antonioni’s first English language film that was part of a three picture deal with MGM Studios that eventually included two other future art house classics- “Zabriskie Point” (1970) and “The Passenger” (1975) starring Jack Nicholson.

Antonioni gleefully plays out his mise en scene in the height of swinging ‘60’s Carnaby Street London deftly combining the growing twin pulses of fashion (the birth of Twiggy!) and music- don’t miss the appearance of blues rockers The Yardbirds featuring a young Jimmy Page and Jeff Beck (both eventually finding their way into the air band Hall of Fame…) as they riff out to “Stroll On” before using an electric guitar to perform interior renovations against a hapless wall… 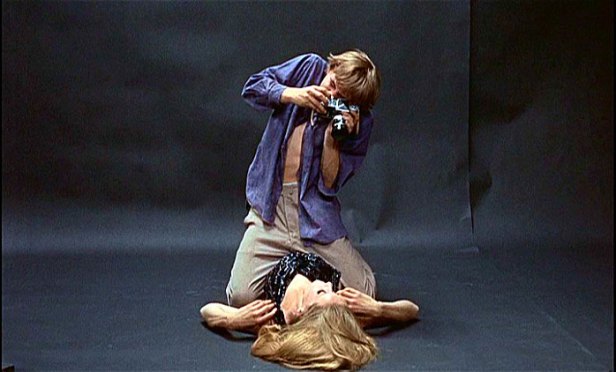 Apparently, Antonioni originally requested the American fuzzed out rockers the Velvet Underground for this scene but nixed that idea when he realized flying the band in from NYC to London would eat into the film’s cannolli budget…

“Blow Up” also helped to smash the censorship malaise that still hung like a bad cloud over mainstream film production during that era as the film was able to be released despite its unprecedented portrayal of full frontal nudity (later to be referred by Monty Python as “naughty bits”).

But perhaps the biggest legacy of this watershed movie was the influence it had on the brash next wave of maverick filmmakers who would spend nearly a decade transforming the Hollywood of the late 1960’s and early ’70’s into a fertile feeding ground where the basic tenets of Euro artistry were grafted into the classic storytelling tropes of Tinseltown to create a new hybrid of exciting vibrant movies.

Filmmakers like Francis Ford Coppola was able to successfully and admittedly cop “Blow Up” into his post-Watergate masterpiece of obsession and wiretapping with his iconic “The Conversation” and Brian De Palma channeled his inner-Antonioni (mixed with a dollop of Hitchcock of course) in one of Tarantino’s all time fave films in the not-so-subtly titled homage “Blow Out”.

Even grumpy contemporary Ingmar Bergman (must be the endlessly bleak Scandinavian terrain and iron rich sardine diet), an avowed detractor for most of Antonioni’s career, had to admit that “Blow Up” was an impressive piece of filmmaking.

Capping off the financial and critical success of “Blow Up on both sides of the Atlantic were the major Oscar nominations for Antonio for Best Director and Screenplay. The film’s cameraman, Carlo Di Palma, eventually would be highly sought after in Hollywood and wound up working on most of Woody Allen’s best efforts in the 1980’s and ‘90’s including “Hannah and Her Sisters”, “Radio Days”, and “Bullets Over Broadway”.

So what are you waiting for? Thanks to Criterion it’s time to get your art house groove on with this Italian classic of world cinema that deserves to be in the collection of any serious cineaste.

One thought on “Blow Up: Antonioni’s Mod Masterpiece”