It’s true- I was raised by Charles Bronson! Back in the early 1970’s, while my fellow 9-year old playmates were out gamboling in the unceasing Winnipeg snowfalls or had their noses glued to the latest exploits of Archie and Jughead comics, my parents gave me a crash course in urban transportation (“Here’s a dime and there’s the bus, dummy!”) and trundled me off to the downtown movie palaces of my childhood every weekend to spend time with my new celluloid parent- Chuck Bronson.

I only needed to see one movie and I was hooked. The film, “Red Sun” (1972), was a Western that had Chuck cavorting and shooting his way (along with Alain Delon, Toshiro Mifune and Ursula Andress) along the American frontier as I sat wide eyed and glued to the seat as six-shooters blasted and samurai swords sliced- if Chuck was, indeed, my new father then this was gonna be some serious kick-ass tough love!

The following Christmas, there I was again sitting in the darkened womb of the Odeon Cinema as I anxiously awaited my next fatherly visitation by the stoical Mr. Bronson as he played yet another hard-boiled, stoical soul as he tutored the young Jan Michael Vincent in the ways of a professional assassin (The film’s tagline: Charles Bronson is The Mechanic- He has a hundred ways to kill, and they all work!).

This was to be the second film that Chuck made with English director Michael Winner in what was to become one of the decade’s greatest actor/filmmaker duos- take that DeNiro/Scorsese!

Of course, this pairing was soon to reach their cinematic high-water mark with the soon to follow vigilante classic “Death Wish” (1974) featuring Bronson’s finest role as he single-handedly reduced NYC’s crime rate using only a snub-nose pistol and a sock full of quarters.

So now here I am the following summer- August of ’73 to be exact- avoiding our city’s latest plague of mosquitoes and hiding out in the Garrick Theatre in anticipation of papa Chuck’s latest kill-fest, “The Stone Killer” (also directed by Michael Winner….my uncle?). On a current note, niche Bluray company Twilight Time has just released a limited 3,000 copy run (they make great wedding gifts by the way…) of this under-appreciated Watergate-era Mafia/cop shoot up gem.

“The Stone Killer” (the title refers to the name given to a contract killer hired but not affiliated with the mafia- don’t worry, no stones, rocks or boulders were harmed during the making of this film…) revolves around Bronson’s tough as nails cop stumbling upon a deadly plot by the mafia to avenge a decades old massacre years later by using Vietnam vets as hitmen.

“The Stone Killer” is not only another in the reliable canon of Bronson/Winner tensely-plotted hardboiled actioners but also is notable for it’s rogue’s gallery of stalwart character actors with supporting roles filled by the venerable Martin Balsam, Norman Fell (not to mention a very young John Ritter presaging their upcoming teaming in the wildly popular sitcom “Three’s Company”), a pre-“Waltons” Ralph Waite and the always-excellent Stuart Margolin. 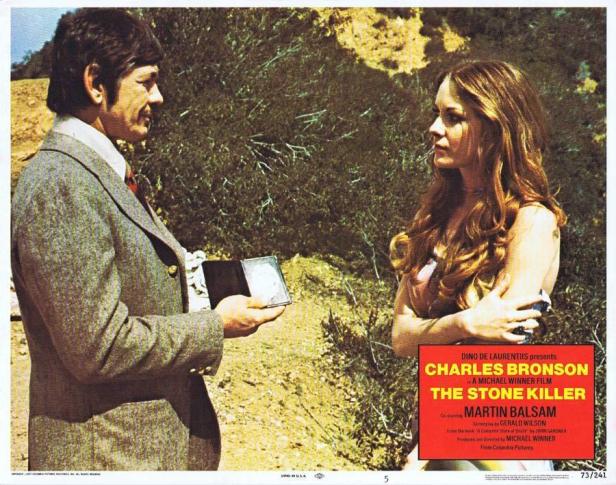 Though not overly recognized as one of the most successful Chuck Bronson flicks mentioned typically from this very fertile era of American filmmaking, “The Stone Killer” can now be given it’s due with this excellent new (albeit fairly barebones) Bluray presentation from Twilight Time whose recent releases of “Cutter’s Way” and “Fat City” allow audiences the chance to own and re-discover these forgotten classics once again.

And here’s to my cinematic father Chuck Bronson- sure, he was tough and maybe at times didn’t like to talk that much- but when I sat in that darkened cinema of my childhood and looked up at that huge screen while he dispatched (with extreme prejudice) all those bad hombres- I took heart in knowing that was just his way of telling me he loved me. 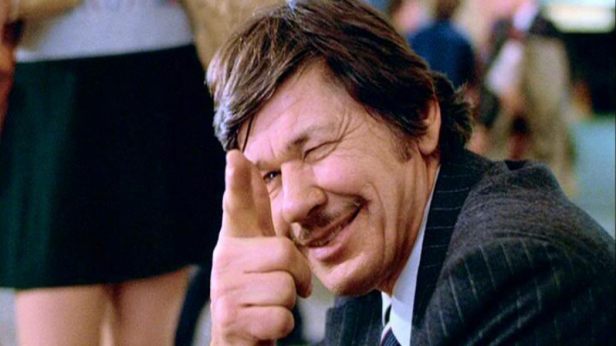