Wholly Cinema was fortunate to catch up recently via Skype with the German filmmaker Peter Braatz as his new documentary feature “Blue Velvet Revisited” screens at art houses around the world.

Culled from the Braatz’s personal on-set Super 8mm film footage/photos/and audio recordings from 1985, the film is a meditative and poetic meditation on the artistic journey of the great David Lynch while filming his classic nightmarish probing of the dark underbelly of American suburbia- “Blue Velvet” starring Laura Dern, Kyle MacLachlan, Isabella Rossellini and the late great Dennis Hopper.

The documentary recently had its American Premiere at Lynch’s own self-curated Festival of Disruption in 2016 which followed one day after its World Premiere in London.

Wholly Cinema: How did the project “Blue Velvet Revisited” come about?

Peter Braatz: This is a remake of a documentary that I made in 1988 immediately when I came back from the shooting of “Blue Velvet”- the film was a 57-minute punk, dada-ist thing with thousands of cuts and harsh music. Also, it was very annoying and people didn’t get it. So after all this time I thought I must make a kind of ‘quiet sister’ to that punk version- one that you can take your time and focus on the pictures which includes much more of the photographs I took. WC: What else was involved in your journey that allowed you to end up on the set of “Blue Velvet”?

PB: Originally I applied at the German film school in Berlin (the other one is in Munich) and to get in I had to write a critique of a film and I chose “The Elephant Man”. Finally, I succeeded to get into the school and I thought I really had this desperate wish to meet this person (Lynch) because he’s doing exactly what I’d like to do.

So I just wrote him a letter including my critique and my first film which was also dedicated to him and asked if I could observe his work over a period of one year. I wanted to make a book maybe about the difficulties of making auteur cinema in the system of Hollywood which is based much more on money than in Europe. After nine months there came a letter from David that just said: ‘Dear Peter- I’m interested’. Then we were in communication through letters for a year and a half and then he said he was going to make a film called “Ronnie Rocket” and that got changed to “Blue Velvet”. He then wrote me and said- ‘We are starting in five weeks- come over and bring a lot of money. It’s a low budget movie’.

WC: What did you have to do to prepare before coming to America for the “Blue Velvet” shoot?

PB: I wanted to shoot in 16mm but no one would give me any money. So I sold my four track recording machine and bought Super 8mm film stock and cassettes. Once I got there, from the first day on I had a ‘green card’ to go everywhere on the set.

WC: What did you notice about filmmaker Lynch’s ‘process’ while on set?

PB: Now thirty years later I could tell you more about how he works but at during that time everything seemed normal- although there were two or three days when he’d spend eight hours filming a lamp and a bulb. Each day David was meditating and everything went quite peacefully. At the studio next door was Michael Cimino’s “The Year of the Dragon” and we heard horror stories about that film. The David Lynch set was the opposite- it was inspiring. 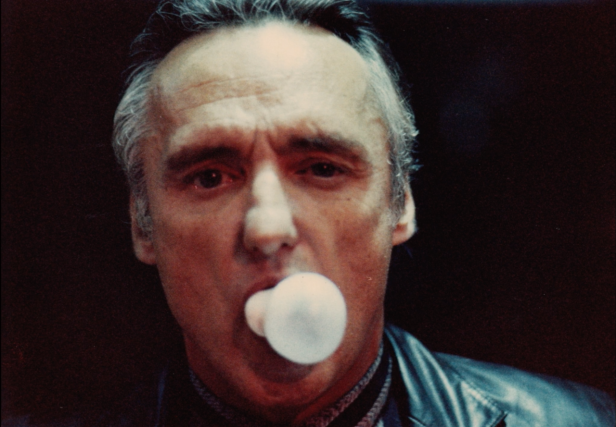 WC: What was it like observing Dennis Hopper on the set?

PB: When he was dressed in character I had the feeling of ‘wow- you don’t want to meet this person in reality’. But as long as the camera wasn’t operating, he was Dennis Hopper, when the camera was running he was Frank Booth. So when he was himself he was laughing, charming- a nice guy to hang out with. I remember he was on set waiting for two hours and he used to watch baseball on a small Watchman- for him this was a most interesting thing.

WC: How do you view the overall career of David Lynch looking back now?

PB: “Eraserhead”, “The Elephant Man” and “Blue Velvet” are three historical masterpieces. And then he put out “Wild at Heart” which was, again, a funky crazy driven film which entertains the audience but still has all the typical David Lynch things inside. And “Twin Peaks: Fire Walk with Me” where he told me that this film is perfect. David is always looking at every detail which makes him more like a composer or a painter. He’s always making films from his own world like Bunuel or Fellini.